I went for a walk through Coburg cemetery the other day. Not somewhere I’d normally go but it’s within my 5 km limit plus I’d run out of walks. Not hard during a pandemic when you end up feeling that you’re walking around in circles.

Cars roared up the Bell Street hill. Most people probably forget that a cemetery is located here on a busy arterial road. My friend and I – both locals of twenty years standing – have never visited this place before. It’s just been somewhere to drive past. We checked the internet and learn that the first burial was in 1875.

As we walked around, we examined the headstones. Some give lots of detail, others just list the name and date of death. Returned servicemen and women all have the same type of plaque. There’s the ornate, the very simple and lots in between. A reflection of the wealthy and the poor we decide.

I felt hesitant about going to such a place with my friend. It’s been a few months since her mother died and they were very close. She hasn’t said much but I know she’s missing her mum terribly. She tells me that the family is headstone shopping – somewhat difficult in the middle of a pandemic. I think that the irony of us walking around a graveyard given her circumstances is not lost on either of us. I suddenly remember that when I was in Edinburgh a few months after my mother died I took a peculiar interest in visiting cemeteries. 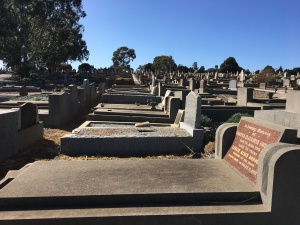 We roughly follow the Coburg Cemetery Trail which gives details of some of the more prominent people buried in this sleepy place. A Collingwood footballer, a sculptor, local councillors and business owners amongst many others. But at the same time, the place reflects the suburbs surrounding it- normal working-class people with simple monuments.

My pal’s family comes from Eastern Europe and my ancestors are Scottish and English. We talk of visits to other cemeteries in other places; Prague, Paris and Edinburgh. I recall a visit to Marc Hunter’s grave at Gerringong, in Southern NSW. Little did I think when I was watching him on Countdown in the ’70s that I would make a pilgrimage to see his grave on a headland overlooking the South Pacific Ocean.

Things we noticed
Common names were Mary and Maryanne and Ralph and John
So many children died so young
So many people so far from home, the graves of Chinese market gardeners, the Punjabi man, the Ukrainian couple, the Italians – usually with a black and white photo- the subjects frowning
The cracked and crooked stones
The crows. They were everywhere
The stumps of a date palm tree growing out of a grave
Succulents and paper daisies growing over the graves
Two new graves – freshly dug with small printed placards giving the dates of death as late August. We wonder if they are Covid deaths.

And we realised, somewhat chillingly, why there were so many headstones dedicated in 1919/20 due to the Spanish flu- another pandemic.

As we walked out through the gates, the traffic noise intensified and we were back in our real lives. But for an hour we’d been immersed in our past, our history and heritage. It wasn’t quite like visiting Pere Lachaise or wandering around Highgate Cemetery, but it’s a reflection of our suburb and our city. And I always get this funny feeling that if I cannot visit my grandparents’ graves or my parents(scattered on the Murrumbidgee River) then going to a cemetery and paying silent homage to long-dead strangers might do the job.

2 thoughts on “A walk amongst the graves”